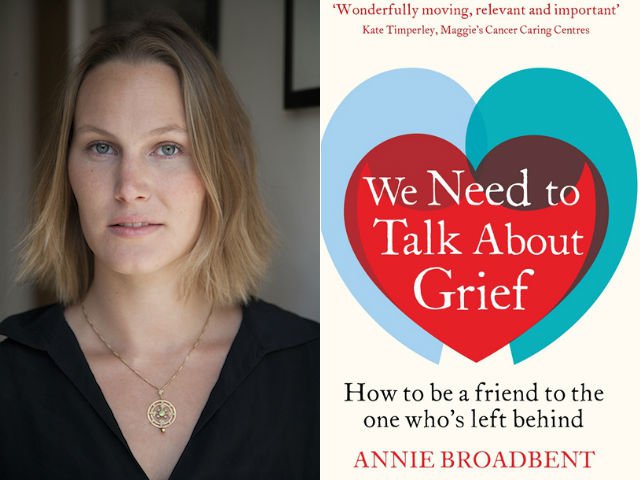 We need to talk about grief, says Annie Broadbent. The psychotherapist, with a particular interest in supporting the bereaved, is the author of a best-selling book about just that subject – written when she was still raw from the death of her mother, Caroline.

Annie will soon be regularly featuring here on Funeral Guide, exploring issues about grief and coming to terms with a loss.

Not everyone knows how best to support a friend or family member who’s been affected by a loss and of course, each of us can be touched by a bereavement in different ways. In her book, Annie explores the ways and meaningful gestures, with which we can try and reach out to a friend who’s experienced an overwhelming loss.

After nursing her mother in the time leading up to her death, Annie began volunteering at the hospice which had provided invaluable support to them both. She began writing her book and made a career change, from charity worker to become the psychotherapist she is today.

Reflecting on her own journey for the book, Annie also drew on the first-hand experiences of other people who’d lost a parent, partner, friend or sibling. What did it feel like? What did you want to hear? What should friends have avoided saying? And what did (or didn’t) help? she asked.

“At the time I wrote it, I was still at a very raw stage and it would be a very different book if I’d written it now,” she reflects, five years on from her bereavement.

Sometimes, saying 'I get it' is better than 'I understand'

In her Funeral Guide blog, Annie will explore questions from the point of view of friends wanting to reach out to the bereaved, as well as those who have lost a loved one.

“People do understand other people’s grief and what they are going through,” she says. “But sometimes, saying ‘I get it’ is better than ‘I understand’ which can sound as though you’re saying ‘it’s the same for me’.

Annie understands that no matter when someone died, or the relationship we had with them, the pain of a loss can affect us all, in different ways.

“The most common thing I hear from people is ‘lots of people loved them, so why should I be taking it so hard?’ It can be incredibly difficult for people to own their pain and ask for help,” she says.

“I hope,” she says, “that my blog will give the bereaved, and friends and family who want to support them, a sense they’re not alone.”

If you have an issue for Annie to discuss in her blog, you can write her at DearAnnie@funeralguide.com

Regretfully, Annie won’t be able to enter into personal correspondence.