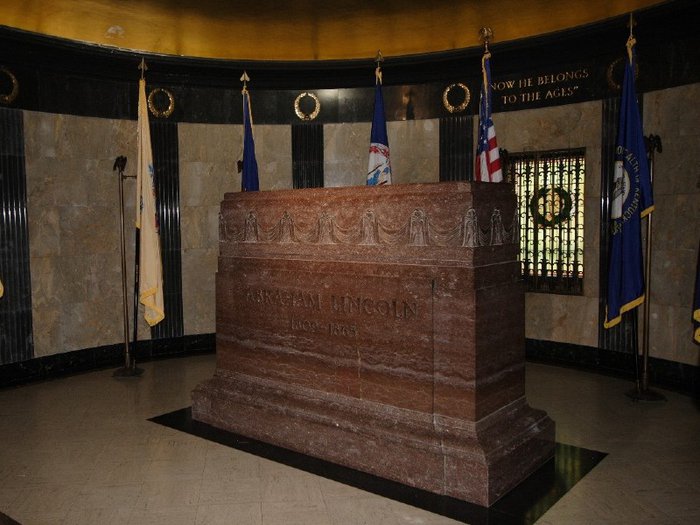 Most Americans know that President John F. Kennedy is buried in Arlington National Cemetery, Virginia, but where are the burial sites of other former presidents of the United States?

This guide explains where some famous presidents are buried, from Zachary Taylor in the Zachary Taylor National Cemetery to Calvin Coolidge in Plymouth Notch Cemetery, Woodrow Wilson in Washington National Cathedral and Ronald Reagan in Simi Valley, California. 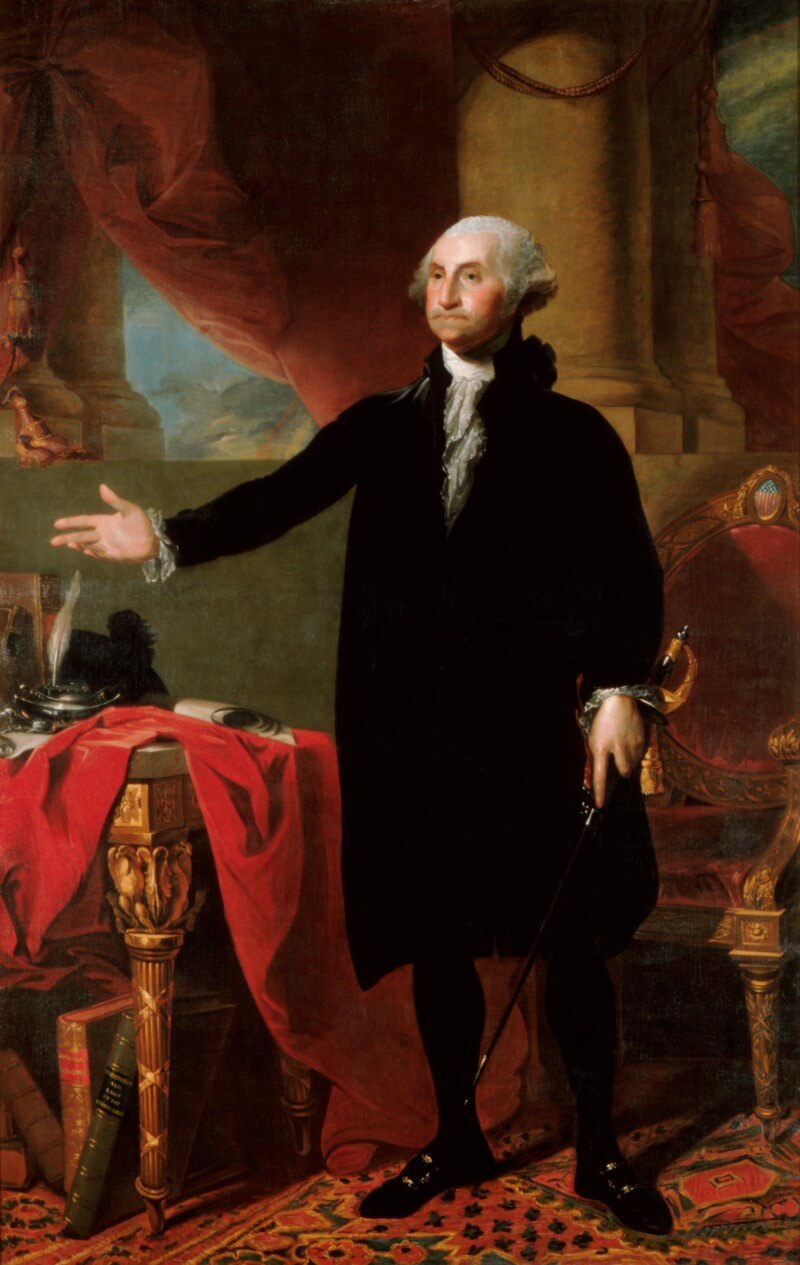 George Washington is buried in the Washington Family Mausoleum on the Mount Vernon Estate in Fairfax County, Virginia. After Washington’s death Congress had hoped to inter him beneath the Washington Monument in the nation’s capital, but the first President had made his wish to be buried in the grounds of his family home very clear. The original Washington Family Mausoleum, the ‘Old Tomb,’ had become dilapidated, so he also left instructions for a ‘New Tomb’ to be constructed. Washington and his beloved wife, Martha, are buried in marble sarcophagi in the New Tomb. The Mount Vernon Estate is open to the public. 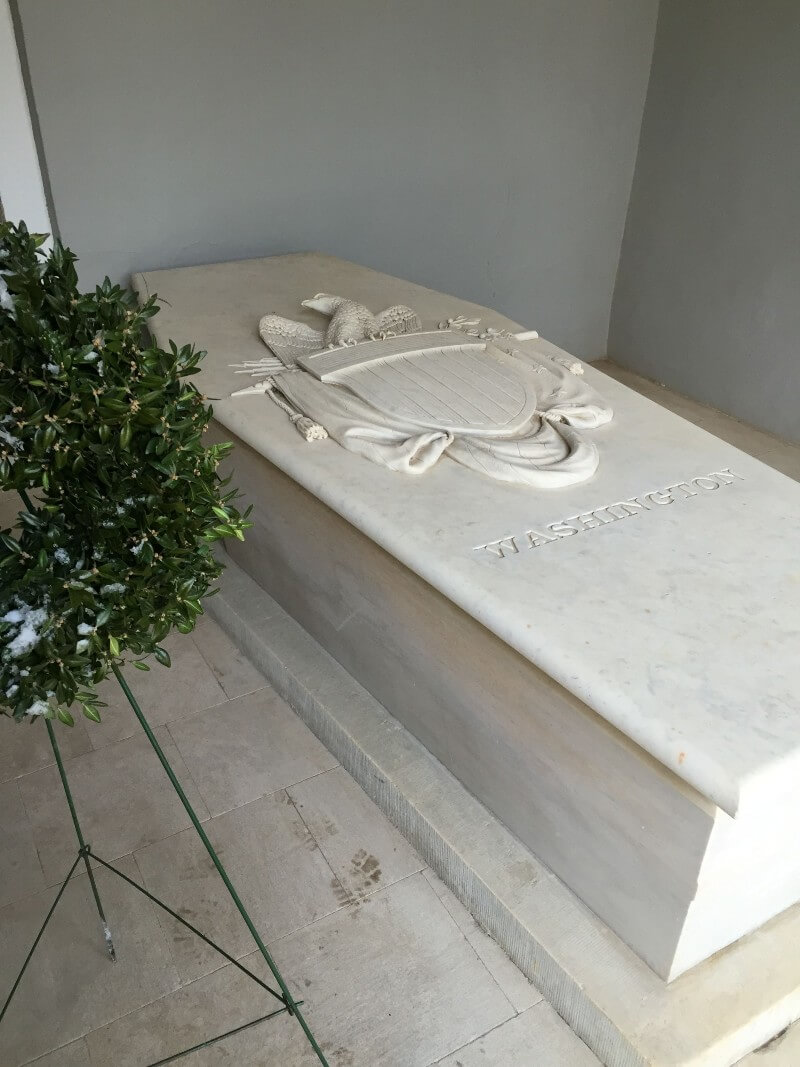 Photo by Laura A. Macaluso, Ph.D on Wikimedia Commons

Inscription: “Within this Enclosure Rest the remains of Gen.l George Washington.”/ "Washington." 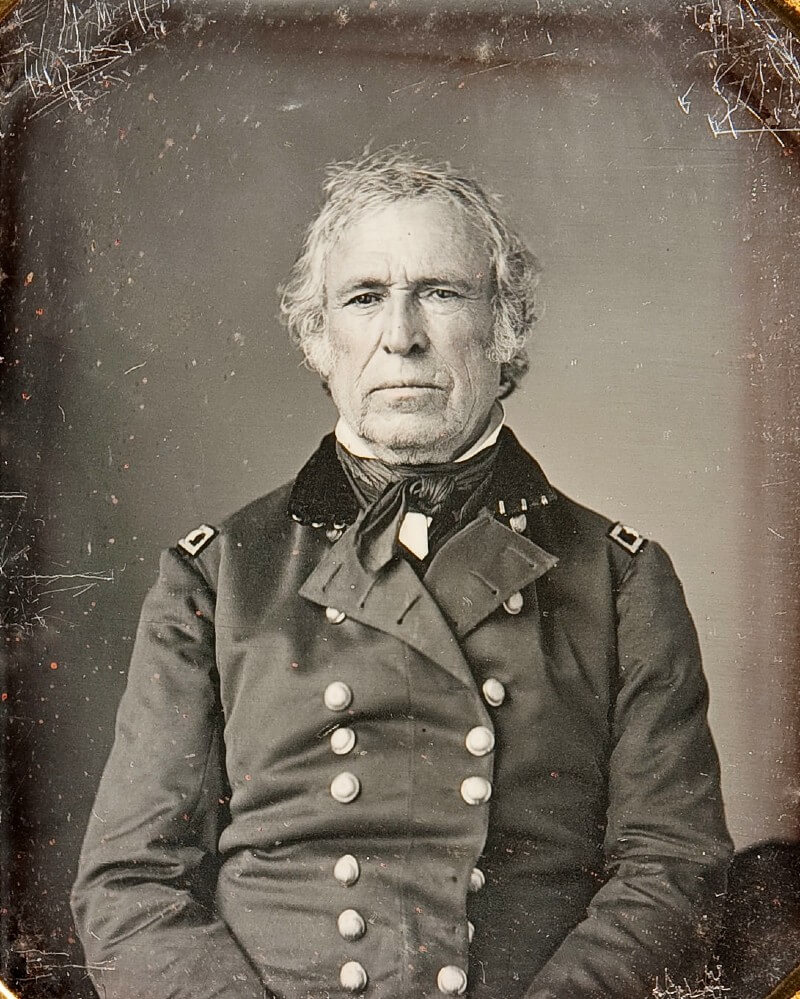 Zachary Taylor is buried in the Zachary Taylor National Cemetery in Louisville, Virginia. Taylor, a former general, won the Whig nomination for the presidency in 1848 because of his popularity after victories in the Mexican-American War.

Taylor's opposition to the admission of new slave states to the Union caused controversy and Taylor’s presidency was cut-short after 16 months because of his sudden death from gastroenteritis, or cholera, in 1850.

In 1991 his body was exhumed and tested for poisoning because he had upset powerful interests in the country. No evidence for this theory was found and it is now believed that poor medical treatment was a more likely cause of his death. 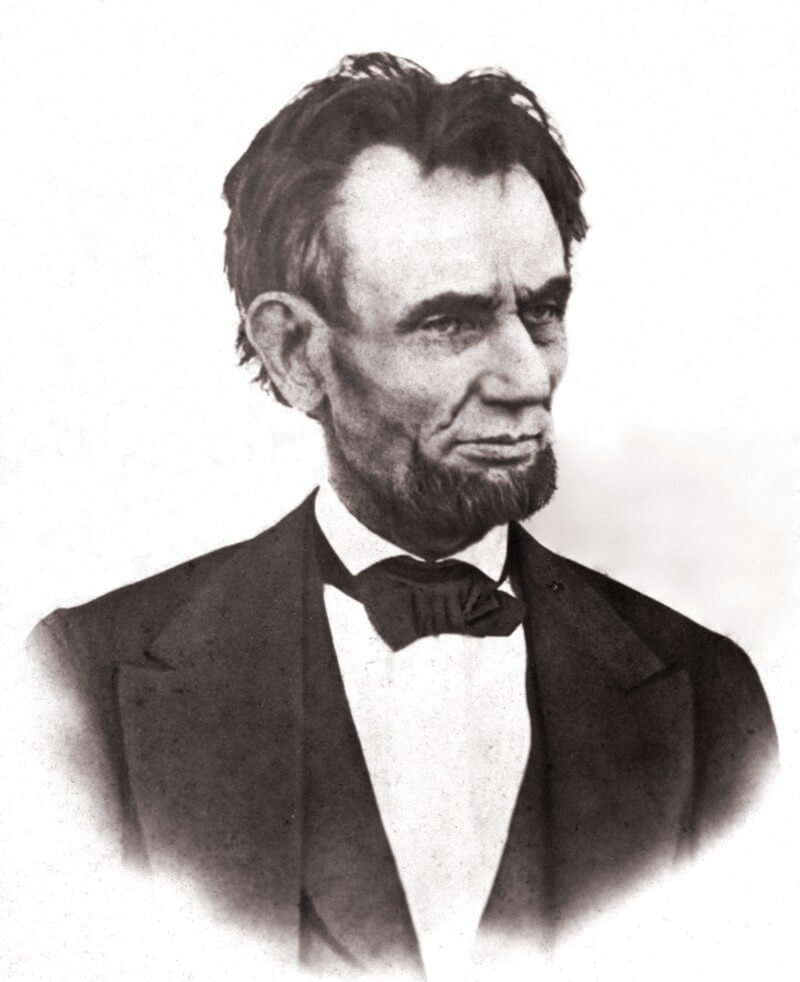 After his assasination in 1865 Lincoln’s body was taken on a two week tour of five states, against the wishes of his devastated widow, Mary, to let hundreds of thousands of mourners say goodbye to their president.

Lincoln was eventually buried in a concrete vault beneath the burial chamber of the Lincoln Tomb in his home state. Three of his sons and Mary, who died in 1882, are interred in crypts in the chamber’s walls. The chamber, and rotunda which leads to it, are lined with models of important Lincoln statues, and plaques with quotes from famous speeches. 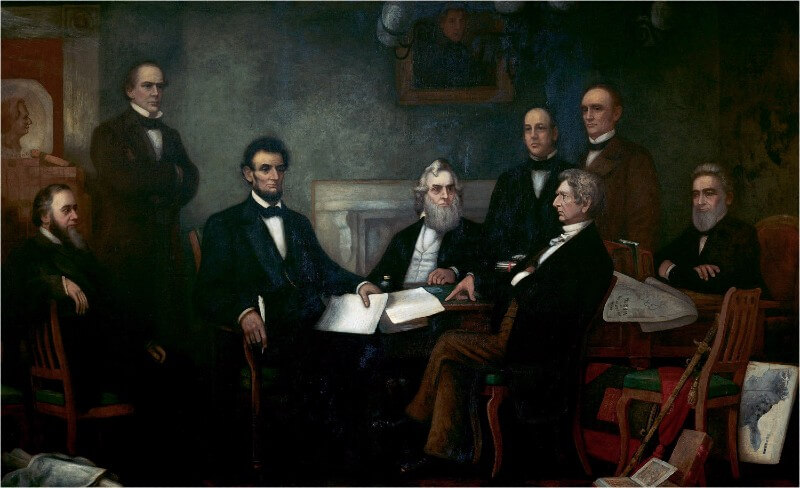 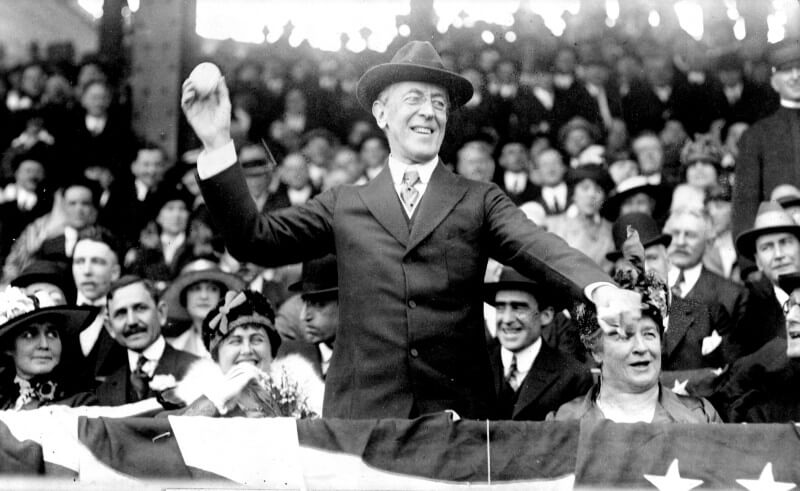 Woodrow Wilson is buried in the Wilson Bay of Washington National Cathedral in Washington D.C.

Wilson suffered a massive stroke in 1919. He refused to resign, but was unable to fulfill his duties for the remainder of his second term. He continued to live in Washington D.C. until his death in 1924. The former president’s funeral was held at his home, before a burial service in the cathedral.

Wilson is the only president of the United States who is buried in Washington D.C. 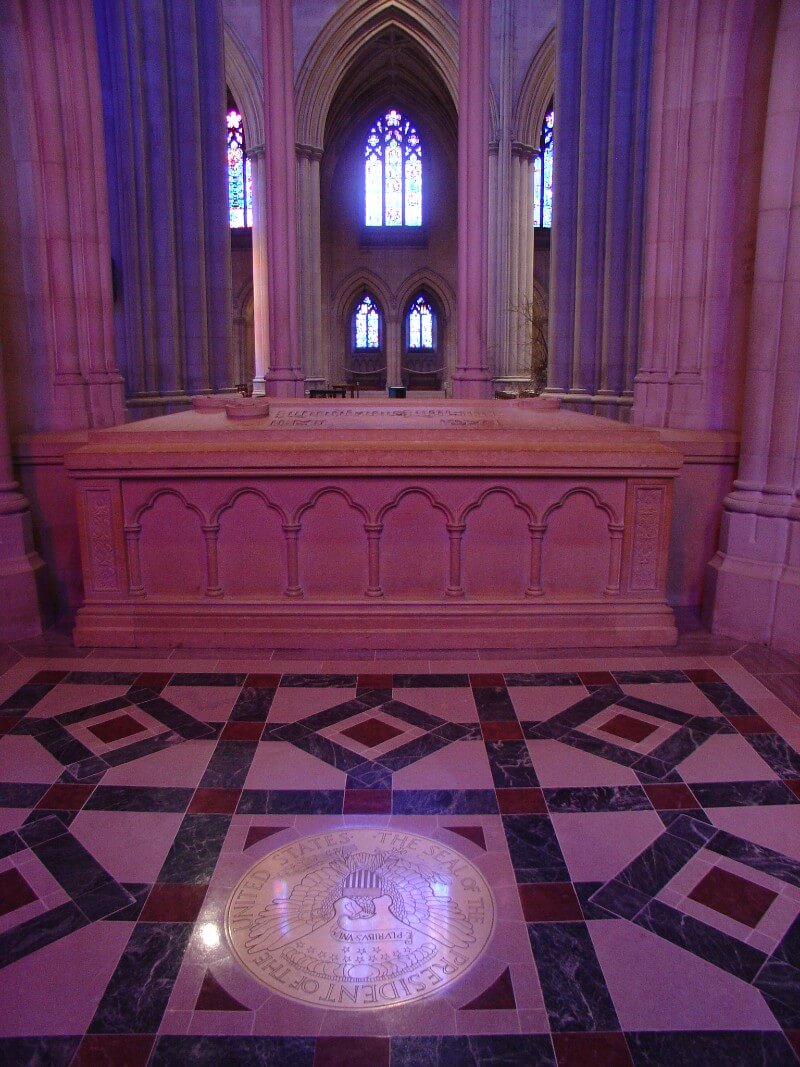 Photo by Moodpocket on Wikimedia Commons

Inscription: “Woodrow Wilson, 1856-1924”/ The Seal of the President of the United States

The President Calvin Coolidge Historical Site preserves his home, and birthplace, as it was during his lifetime. Plymouth Notch cemetery is only a short walk from the site. 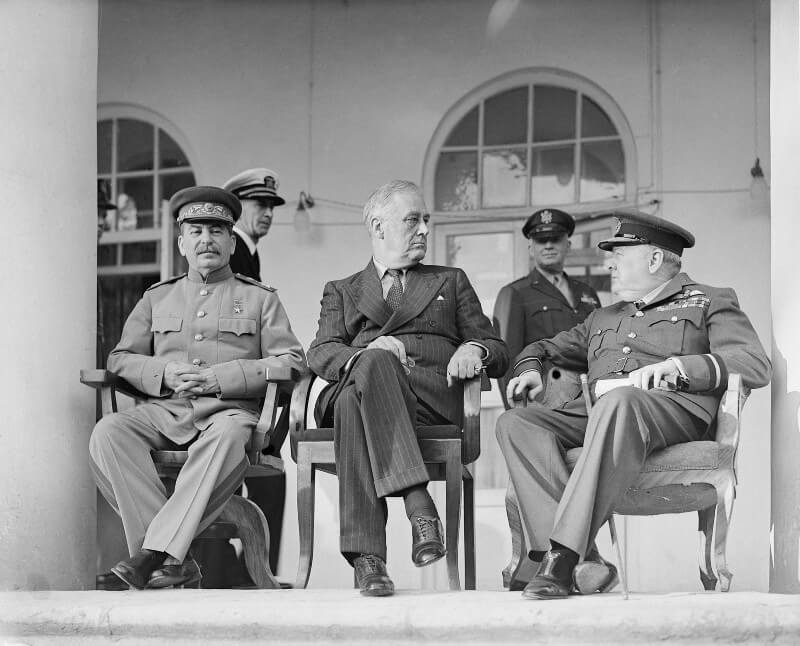 The house, called Springwood, was President Roosevelt’s birthplace in 1882 and remained his home until his death in 1945. The longest-serving president donated his home to the United States Government in 1943, and it was designated a National Historic Site after he died. The Franklin D. Roosevelt Presidential Library and Museum is situated on the estate and built under his instructions between 1939 and 1940.

Roosevelt and his wife, Eleanor, are buried in the Springwood Rose Garden. President Roosevelt’s beloved Scottish terrier, Fala, is buried nearby. 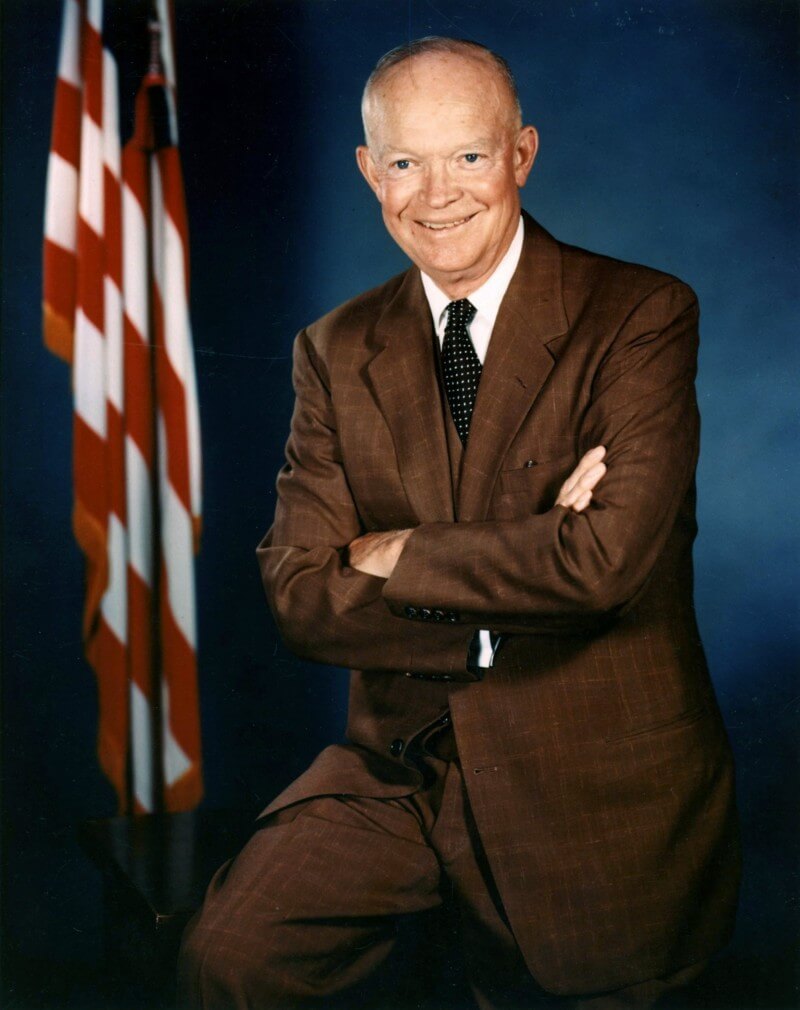 Photo by The White House on Wikimedia Commons

The Supreme Commander of the Allied Forces in Europe during the Second World War, Eisenhower requested burial in the $80 U.S Government issue casket provided for ordinary soldiers. An additional glass seal inside cost a further $115. 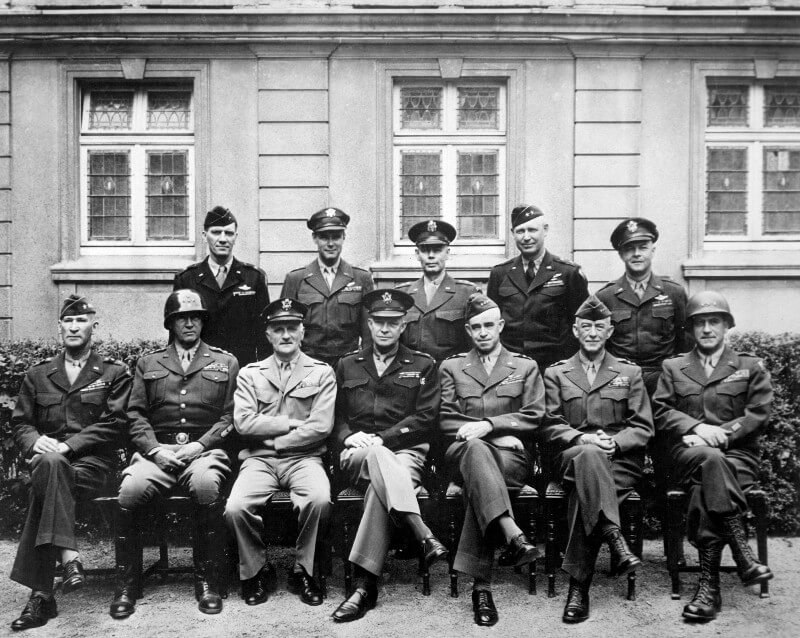 The final resting site of Dwight and Mamie Eisenhower are bronze and cement vaults in ‘The Place of Meditation’, constructed from Travertine marble and walnut woodwork opposite their former home on the Library and Museum site. Words from a prayer the President wrote for his 1953 inauguration are embroidered on a large wall hanging. 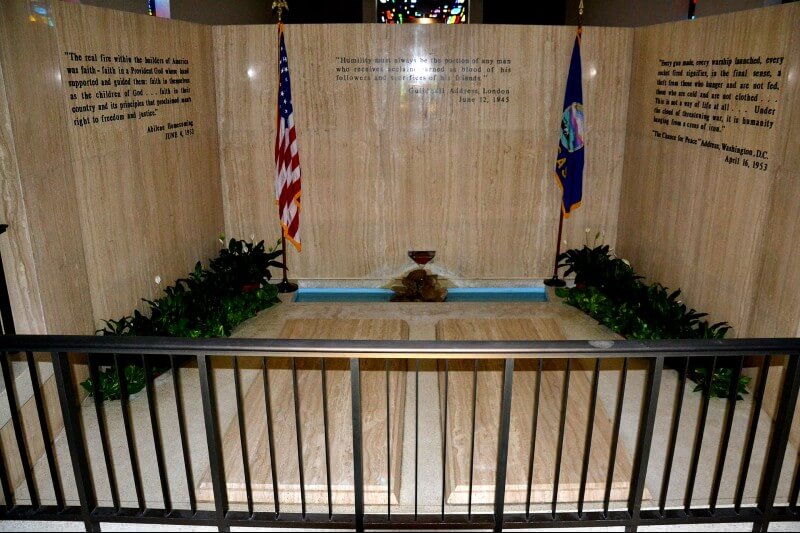 Photo by CSvBibra on Wikimedia Commons 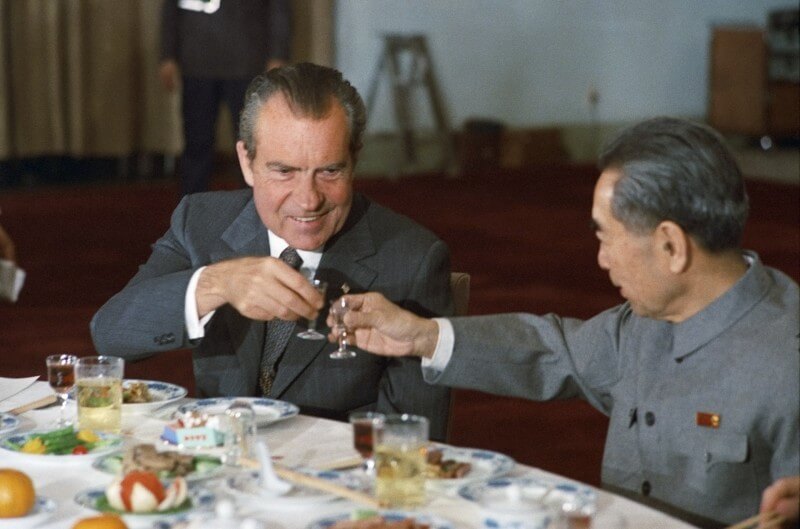 After his resignation in 1974 President Nixon retired to California, but later lived in New Jersey. He died in 1994 after a massive stroke. President Clinton declared a Day of National Mourning and Nixon was given a state funeral, attended by all five living Presidents, in Yorba Linda.

The graves of President Nixon and his wife, Pat, can be visited at the Nixon Library.

Inscription: “Richard Nixon, 1913-1994, The greatest honor history bestow is the title of peacemaker.” 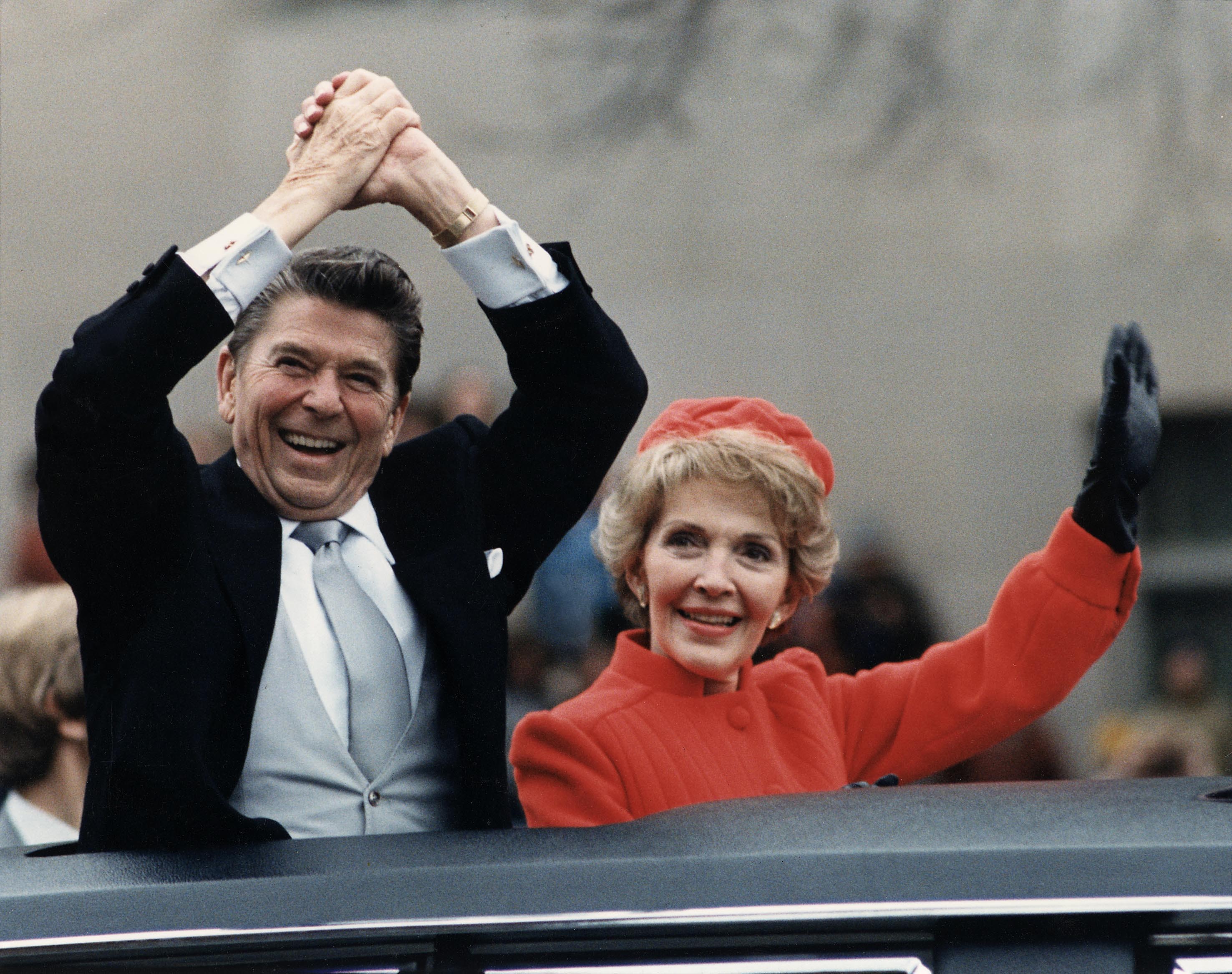 After his death in 2004 President Reagan was given a state funeral in Washington D.C, before his body was returned to California, the state he had governed before becoming President in 1980.

The memorial to President Reagan is made of granite and faces the Pacific Ocean. His wife, Nancy, who died in 2016, is buried next to him. Every year on 6th February, Reagan’s birthday, there is an annual celebration of his life, which is open to the public and free to attend. 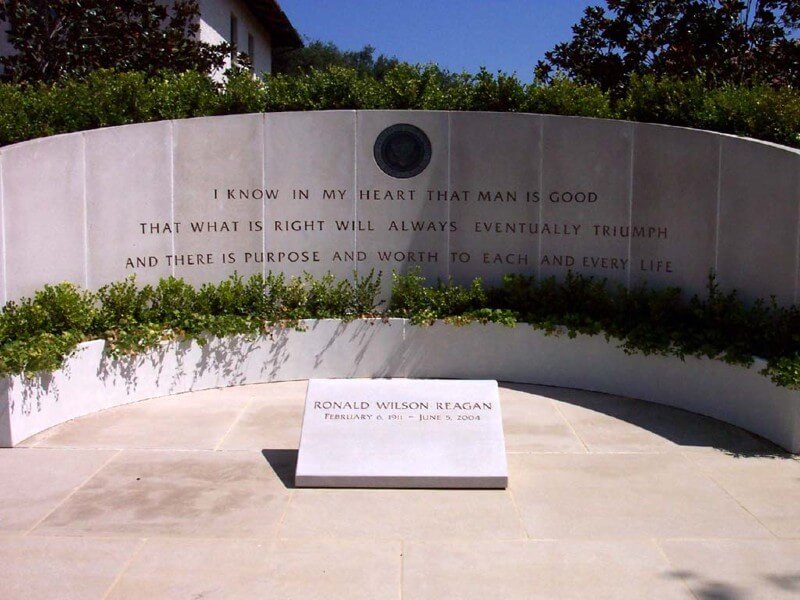 Inscription: “Ronald Wilson Reagan, February 6, 1911-June 5, 2004.”/ “I know in my heart that man is good. That what is right will always eventually triumph. And there is purpose and worth to each and every life.” 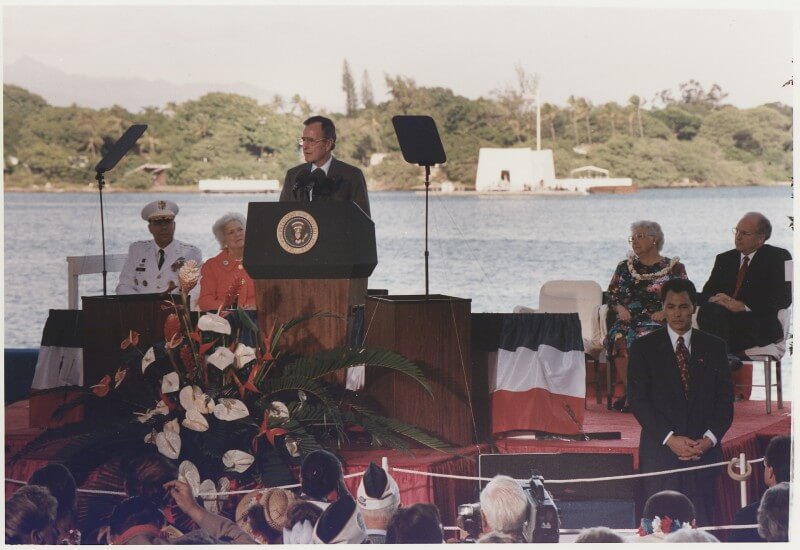 President Bush Snr. died in December, 2018, a few months after his beloved wife, Barbara Bush. Bush’s state funeral was the first send-off for a former president since President Gerald Ford died in 2006.

The funeral ceremonies lasted for four days, including 2 days of lying in state in the rotunda of the Capitol Building. The funeral in Washington National Cathedral, which was attended by all five living presidents, included a fly-over in missing man formation by the United States Airforce and a eulogy by his son, President George W. Bush.

After the funeral, his body was returned to Texas for burial next to Barbara Bush at the Bush Library. The George H.W. Bush burial site was open to the public a few days later.

As per President Bush Snr’s request, the presidential anthem, "Hail to the Chief", was not played at his burial.