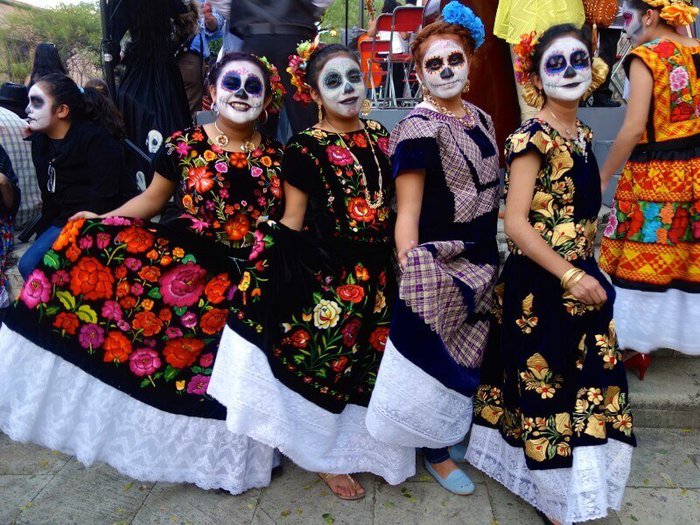 Every year more and more Americans are celebrating the Mexican holiday of Day of the Dead ( Dia de los Muertos).

The festivals of Day of the Dead can appear to be an upbeat celebration of death, with colorful parades, vibrant costumes and delicious food, but it is important to remember that this traditional ritual is seriously observed by many families in Mexico and Americans with Mexican heritage. The facepaint and sugar skulls are fun, but Dia de los Muertos is mainly an opportunity to celebrate the memory of loved ones who have died. 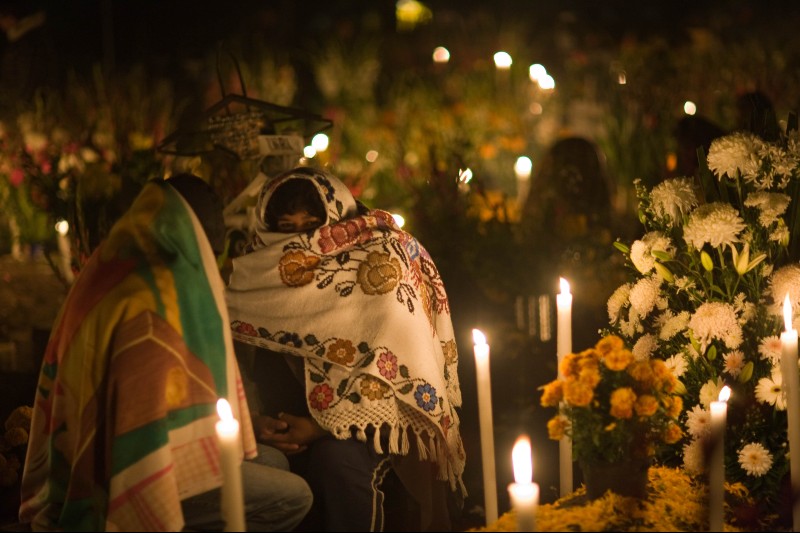 What is Day of the Dead?

Day of the Dead is an annual festival in Mexico and other Latin American countries, which celebrates the memory of people who have died with colorful carnivals, costumes, art and food. Traditional Day of the Dead rituals in Mexico include visiting cemeteries and creating shrines to loved ones who have died, but more recent celebrations also include large parades.

What happens at Day of the Dead?

The most traditional ritual for Dia de los Muertos is the creation of shrines (ofrendas)with offerings for loved ones who have died on their brief return to the world of the living. These offerings include flowers, such as yellow marigolds, purple orchids and white amaryllis, decorated sugar skulls (calaca), candles or battery-powered lanterns, toys and tokens decorated with skull, bones and flower motifs.

If an expected visitor was a smoker or drinker it is common for cigarettes or alcohol, including liquor, to be placed on the shrine. 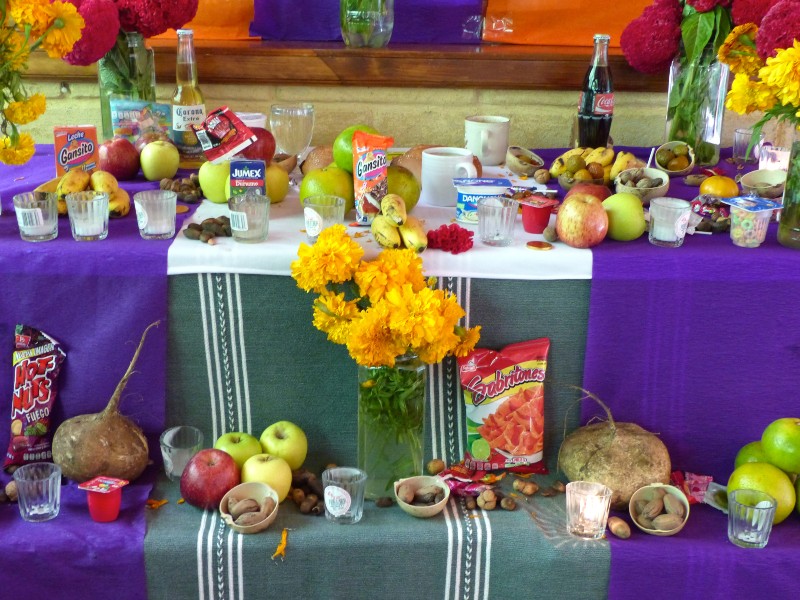 On the second day of the festival many families visit cemeteries where their loved ones are buried to clean the graves and decorate them with offerings like the ones placed on the ofrendas.

The brightly colored carnivals associated with Day of the Dead are more recent innovations that have developed in the twentieth century. 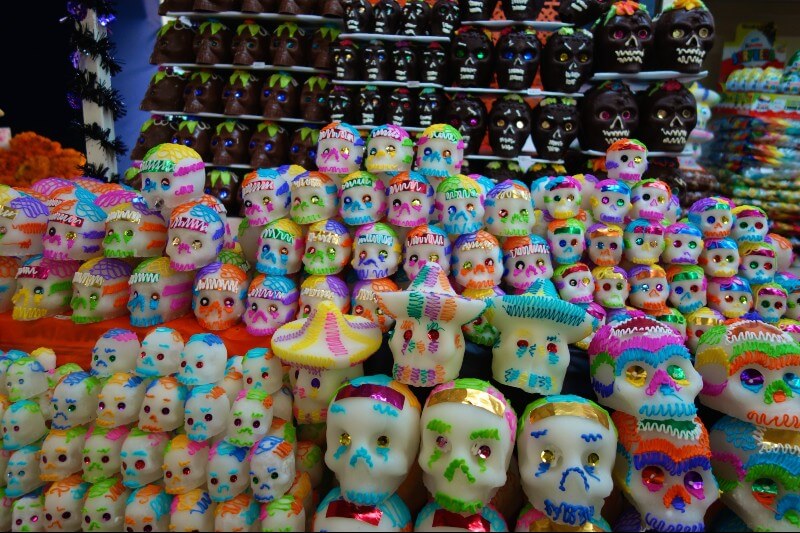 The design of the costumes and artworks of Day of the Dead are largely inspired by José Guadalupe Posada, a Mexican artist whose illustrations of skeletons, called calaveras, have become associated with it. Skull makeup, flower garlands and flowing Edwardian-style gowns in the style of Gaudelupe's calaveras, called La Catrina are worn by many people who participate in Day of the Dead festivals and celebrations.

When is Day of the Dead Celebrated?

Where is Day of the Dead Celebrated?

Day of the Dead is a Mexican tradition, but is increasingly popular across North America, especially in U.S states with large Hispanic communities, such as California and the south-west. 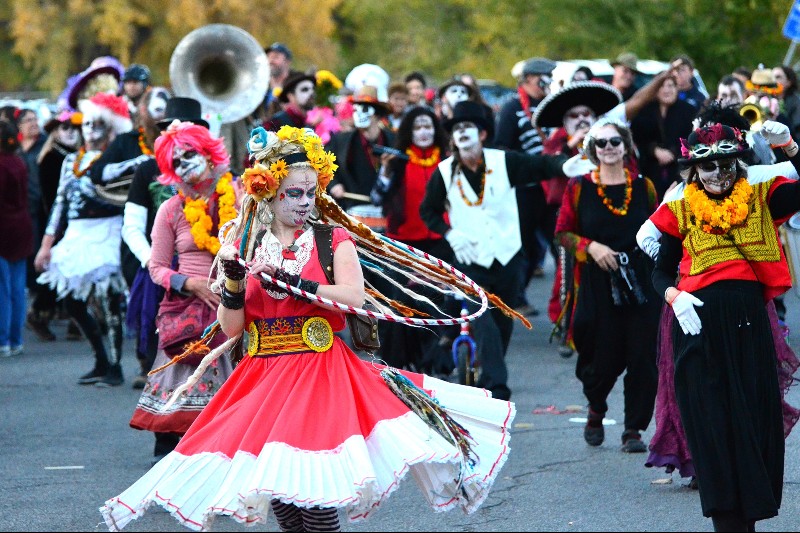 In recent decades many Latinos who might not have celebrated Dia de los Muertos in previous generations have embraced it as part of their traditional culture. Every year alt.Latino radio on NPR marks Dia de los Muertos by broadcasting a 'sonic altar' of musical dedications for people's loved ones who have died.

What is the history of Day of the Dead?

Dia de los Muertos originated in what is now Mexico after the indigenous populations of Aztec, Toltec, and Nahua peoples adopted the Catholic beliefs of the Spanish Conquistadors who settled there. The indigenous people did not mourn those who had died, but celebrated the memory of their lives with festivals led by the Lady of the Dead,Mictecacihuatl.

After conversion to Catholicism these rituals were still celebrated, but the dates became fixed on the Catholic holy days of All Saints Day (November 1), when believers pray for people who are in Heaven, and All Souls Day (November 2), when they pray for everyone who has died. The conquistadors successfully converted the indigenous population to Catholicism and the Day of the Dead was celebrated on the dates in the Catholic calendar most closely associated with it: All Souls Day and All Saints Day.

In recent years more elaborate festivities, such as parades, have become commonplace. The current traditions and rituals of Day of the Dead combine these beliefs with more recent inventions that have shaped the food, costumes and art associated with it.

Where are the most famous Day of the Dead festivals in America?

There are celebrations of Day of the Dead across America, but the oldest and largest are mostly in states with large Hispanic populations: California, Texas, Arizona and New Mexico.

There are many celebrations for Day of the Dead throughout October and early November. The largest event in the 'Land of Enchantment' is the Marigold Parade and Festival in Albuquerque's South Valley in the first Sunday of November.

El Paso, the most westerly county of Texas, is on the Mexican border and the majority of El Pasoans are of Hispanic heritage. There are lots of places to celebrate Day of the Dead across El Paso, including the El Paso Museum of Art, but one of the most atmospheric is Concordia Cemetery in El Paso county.

Concordia Cemetery is the burial site for tens of thousands of people who died in the 19th century, including Chinese immigrants, Mormons, Jews and African-American Civil War soldiers. The Paso Del Norte Paranormal Society, who run a ghost tour around the cemetery, insist that it is actually haunted.

The annual Day of the Dead festival at the Hollywood Forever Cemetery in Los Angeles is almost as legendary as some of the people buried in it. The Dia de los Muertos festival features incredible costumes, paper statues, food, ofrenda, music and dance, staged as a glorious tribute to much-loved people who have died.

There are lots of other celebrations for Day of the Dead in Los Angeles, and across California.