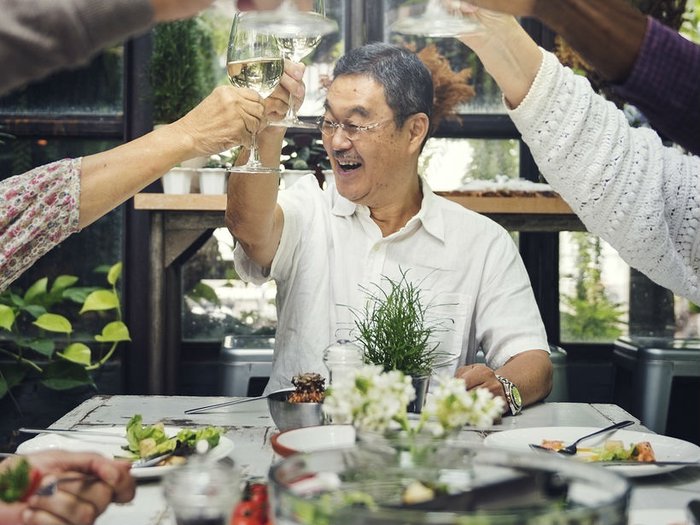 When 80-year-old Bob Eleveld knew his time was near, he told loved ones: “Please know that the end of my life is the ultimate ‘peanut item’ in comparison to how much I have enjoyed my life with all of you.”

It was his dearest wish to attend his own wake, a celebration of life party, held not only before his funeral, but before his death. The Michigan attorney’s farewell made news around the world, as his family and friends ate roast beef sandwiches, raised glass of red and shared laughter at the wake held in his honor.

Sadly, Bob became too ill to fulfil his own wish to attend the living funeral party at Thousand Oak Gold Club to, as he put it, “share a moment with all the people who have touched my life in so many ways,” but the party went ahead on March 18, just as he wanted, a day before his death.

Living with a cancer diagnosis and aware that his time was short, Mr Eleveld had penned his own obituary and planned celebration of life party ideas. He invited loved ones to the party of a lifetime – his lifetime – expressing a wish for them to celebrate his life with him.

“As I write this notice, I am still with you, although my doctors have informed me that this status will change in the near future,” he wrote.

“I have decided to eschew the normal process of others celebrating my life after I die.”

A celebration of life

Kerry Eleveld later said there had been an “outpouring of love” for Bob, pictured left, who died just a day after his celebration of life. She told WLNS-TV: “Long before he had cancer, he would always say, ‘Don’t throw a funeral for me. Have a party.’”

It’s not unusual these days for people to plan their own funeral arrangements, deciding between burial or cremation, choosing special funeral hymns and songs, colorful dress codes for mourners and even celebration of life party ideas.

What’s more uncommon is for people to attend their own funeral party – so when they do, it tends to make headline news. In China last year, 66-year old Zhang Deyang spent 16,000 yuan ($2,323) on arranging his own living funeral, explaining: “I wanted to separate which people in my life truly cared about me and which ones were fake.”

In southern California, 41-year old artist Betsy Davis gathered her friends around her for a joyous celebration of life, shortly before her doctor-assisted death. Betsy, who was in the late stages of a terminal degenerative disease, ALS, or Lou Gehrig’s disease, described her celebration of life party as a Rebirth Ceremony and told friends and loved ones who attended her life celebration “no tears”.

Australian poet and author “Big” Bill Neidjie had his own celebration of life party ideas which he put into action “in order,” he explained, “to hear nice things said about me.” His living wake was held in 2001, a year before his death and attended by friends, relations, politicians, scientists and park rangers.

Like Bob Eleveld, Andy Fitchett had his own celebration of life ideas. Soccer fan Andy, 56, from Swindon, England, had been diagnosed with terminal cancer when he planned his own wake, which he not was only looking forward to attending, but also performing a stand-up comedy routine for guests.

Andy said he’d planned his funeral party and also arranged and paid for his funeral in advance, to make life a little easier for his two grownup daughters, who had already lost their mother. Sorting out his affairs made him think about the many people he’d met during his life, some of whom he’d lost touch with, over the years. “I realized I wanted to thank them all for being part of my life and being my friend, that’s why I decided to organize and go to my own wake,” he said.

“The next day, I also want to ring up those who don’t turn up – and ask why, as a joke!” Sadly, Andy died shortly before his celebration of life party, but it went ahead, raising money for charities close to his heart in his memory.

Described by those who loved her as “sassy,” teenager Morgan Long began her brain cancer battle when she was just 17 months old and lived her 19-year life to the full. So why, she reasoned, when doctors told her there was nothing more they could do, would she want people to come and see her when she was dead? Instead, last June, she held a beautiful, colorful celebration of life party themed around her personal motto “believe”, where she, friends and relatives released endangered monarch butterflies into the woods.

Morgan, from Cotton, Minnesota, died in October, requesting that everyone who loved her wear “bright and happy” colors to her funeral.

Life celebrations can be an important occasion for the bereaved, a chance to reflect on joys, loves, laughter and moments that make their sadness easier to bear. But for those who know their lives are drawing to a close, a living wake can be a wonderful way for everyone to their bestow blessings and say goodbye in person. Discover more about how to plan a funeral in our Help & Resources section.